skip to main | skip to sidebar

Helen Thomas is my Hero

You may have missed this photo. It seems only the Washington Post published it, then got grief about it. The government... that is to say... our U.S. Government, has been pulling out all stops to keep us regular American citizens from seeing the consequences of the war in Iraq.

The Washington Post published this photo, of 2 year old Ali Hussein, being removed from rubble left by a US Airstrike. He later died. 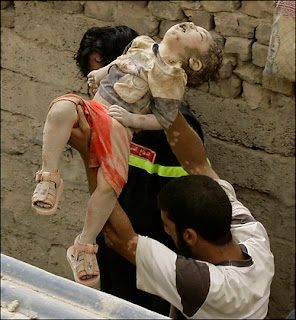 The photo is hosted at washingtonpost.com and was taken by Karim Kadim, Associated Press Photo. (He also was part of the AP pool who won the 2005 Pulitzer Prize for breaking news. Those photos can be accessed here.)

Some people complained that this was published in the newspaper.

Helen Thomas responds in her column, A Picture Is Worth A Thousand Words

Howell [Post ombudsman] said some readers felt the photo of the Iraqi boy was “an anti-war statement; some thought it was in poor taste.”

Howell said her boss, Executive Editor Len Downie, “is cautious about such photos.”
“We have seldom been able to show the human impact of the fighting on Iraqis,” Downie was quoted as saying. “We decided this was a rare instance in which we had a powerful image with which to do so.”

It’s unclear to me why this was deemed to be “rare.” After five years of war, there is finally one photo that is supposed to say it all?

what a shame for DC, but what a great person Helen is... too bad the rest of the press CORPSE are spineless and ball-less...

Good for Ms. Thomas for standing against this kind of BS.

Perhaps if we were truly presented with the facts of war we would not be so anxious to declare one. What did these people do to deserve this? If we cannot identify with the innocents of our actions then we do not deserve to refer to ourselves as human beings. We were outraged by 9/11 yet so no reason not to commit the same atrocities on humans who had nothing whatsover to do with it. Hiding the truth does not make our actions noble.

I don't remember any comments that the photo of the small girl being carried from the rubble of the Alfred Murrah building in OK City being in poor taste (it ran on the front page in my city), and this photo is very similar. Many Americans don't want to be reminded that this is done by the US government in their name.

When I first saw that photo, I almost cried - this time I did! I have a dear 2 yr old grandson (my first grandchild) whose body shape is so similar to this poor little fellow's that my tears just arrived.

This kind of photo needs to be seen!
Those who think we are 'liberating' Iraqis should put this on their mirrors!

What kind of a mind is so horribly twisted that it can see that picture, and complain that it is an antiwar statement? How can you not be moved by the tragedy? Are Iraqis less than human to such a person? That's the only explanation I can come up with.

For Fun and Frolic

Sites and Blogs you should visit often

Listen While You Work

How Funny is This?